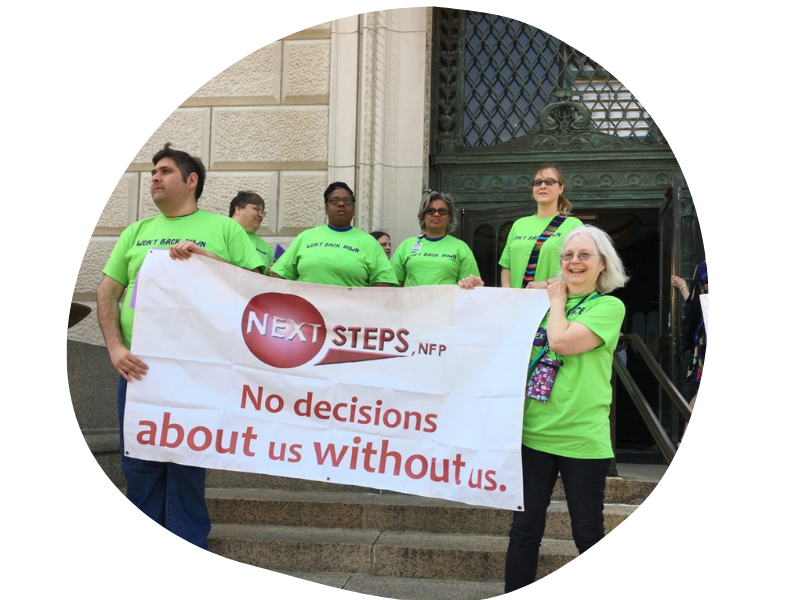 NEXT STEPS, NFP works to ensure that people with lived experience of the following: (but not limited to) homelessness, mental illness, substance use, and justice involvement are represented in discussions that lead to the development, revision, implementation, and funding of healthcare, housing, and various social policies at the state, local and (often federal) levels.

A world where people with lived experience of/or are recovering from homelessness, mental illness, substance use, and justice iinvolvement  are able to live self-determined lives in communities of their choice, unfettered by discrimination, prejudice, and stigma. Our goals include, but are not limited to meaningful employment, safe and affordable housing, access to education, and helpful supports and services of their preference.

Next Steps was founded in 2003 by Fred Friedman. Fred has received specialized training in consumer leadership, the mental health system and recovery. In 2005, he completed the Illinois Recovery Support Specialist training and Certificate Program. He completed the Central East ATTC Leadership Institute Immersion Training in 2010; he was one of only 10 consumer leaders that SAMHSA selected for the training that year. He has completed a 16-hour course called Pathways in Living, and subsequently co-taught the course many times. Last year, he extensively revised the Pathways in Living curriculum.

Most of Fred’s knowledge of the symptoms of mental illness and of the mental health system comes from his 48 years of lived experience of a mental illness and his experience in the mental health system and the homeless services system. These experiences include a short period of involuntary psychiatric hospitalization, a year and a half in an Institution for Mental Disease, and 10 months in a homeless shelter.

While still living in the homeless shelter, he began to attend meetings of the Chicago Continuum of Care (CoC), whose mission is to end homelessness. When he was told that he could not serve on the Board of Directors because he was homeless, he co-founded Next Steps, NFP, whose mission was to ensure that people with disclosed lived experience of the homeless services system have a voice in the policies of that system. He became the first person with disclosed lived experience to serve on the CoC Board, then on the Executive Committee, and eventually as the Board Chair. Today, people with lived experience constitute 25% of the CoC Board of Directors and every three years a person with lived experience serves as Board Chair.

In 2005, Friedman engaged in an extensive process, including interviewing more than 30 people, to redefine the Next Steps mission. Through this process, he extended the mission to include making sure that consumers had a voice in the mental health system.

Next Steps was originally created to change the Chicago Continuum of Care (CoC) (to end homelessness). When Next Steps was formed, people with lived experience of homelessness were not allowed to be on the CoC Board of Directors, and the model of care was “housing ready,” meaning that people did not get a home until they were “ready” for it. Within three years, in part as a result of Next Steps’ advocacy, the model was changed to “Housing First,” meaning that people get a home and then they are helped to make changes in their lives. Again as a result of Next Steps’ advocacy, 25% of the Board now consists of people with lived experience of homelessness, and every three years a person with lived experience is Chair.

Note* We do not sell or share any of your information. The purpose of this form is to simply connect and see how we can work together.

Organizing change for mental health, homelessness, and those with justice system involvement.

Nextstepsnfp.org is a 501(c)(3) non-profit organization

About Next Steps
Our Work
Shop
Donate